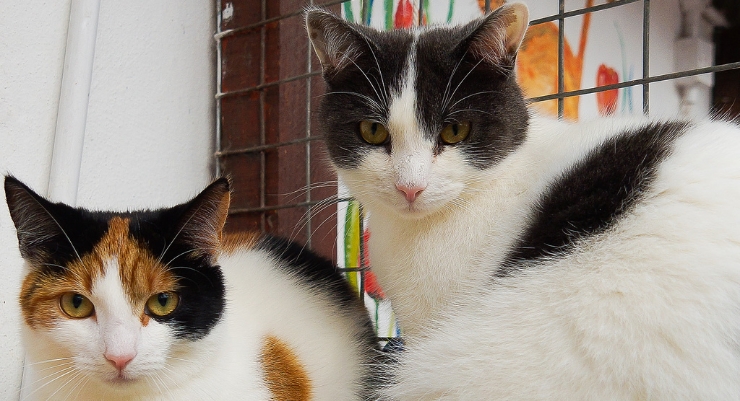 
We always had cats when I was growing up.

Our parents never said no, so my brother and I just kept dragging those cats and kittens back home with us — from our grandparents’ farm, from outdoor flea markets and occasionally from some family friends who just happened to have a spare kitten.

Somehow the male cats always seemed more affectionate. But is there really a personality difference between male cats and female cats?

Only when I got Christy, a sealpoint Siamese kitten, in junior high school did I finally get to experience how loving a female cat could be.

But at the time, I assumed this affection was just the Siamese personality.

Until that little Siamese came along, all of our female cats were intact.

But Christy lost a front paw after being hit by a car, and spaying her seemed like the right thing to do, especially since she’d already gone through one miserable heat.

A queen can go into heat as early as 6 months.

What’s more, she is seasonally polyestrous and cycles in and out of heat during a good portion of the year starting in January or February and continuing into the fall. In warmer regions, the cycle starts in late December and ends sometime after the summer solstice.

A female cat is capable of having 2 or 3 litters every year, and she may continue to do so until she is 8 or 9 years old. So her life essentially evolves around kitten-bearing and rearing.

It’s no wonder that Bastet, the cat-headed goddess of ancient Egypt, was associated with maternity.

It also may be why spayed females come across as being more loving: Their world is not entirely kitten-centric.

In fact, sometimes they transfer all that maternal feeling to their humans. Dawnie, another cat, did that with me after she lost her only kitten and was spayed.

So maybe it wasn’t entirely the Siamese thing with Christy. Maybe her having been spayed had just as much to do with her being the little love bug that she was.

While stressing that cat personalities vary widely, she says, “Many male cats have a cuddly ‘lap cat’ personality. Female cats are often more cautious and may take longer to trust you.”

Some people clearly still have strong feelings on the subject.

I came across an online discussion recently (not very scientific, I know) where the commenters frequently described female cats as bossier and more independent. Others said female cats were more “possessive” or “changeable” in their moods, even “neurotic.”

Sometimes, the feeling has a lot to do with what we’re used to.

“I never had a female Abyssinian,” says Carla Wong. Her male cat “loved me to pieces. He was the best company ever, loved being groomed, loved a piggy-back ride…. I would get another male.”

On the other hand, Wendy Ratza says she always had female cats growing up “because we worried about males that sprayed, and we didn’t want to deal with that.”

Her fear was warranted because research demonstrates that “male cats are more likely to spray and fight if they are in households with female cats than with other male cats.”4

Years later, a male cat named Leo joined her female cat in the household. Fortunately, Leo turned out to be just as affectionate and well behaved as the breeder had promised.

But … There’s Probably No Real Difference

I’ve worked with cats for years — purebreds, strays and barn cats. And I’ve had an equal number of affectionate female cats and affectionate male cats.

“There is no ultimate answer to the question of whether male cats are better pets than female ones and vice versa,” says Emily Parker, writing for Catalogical.5

“Each feline furball is one of a kind. Whether your cat is affectionate, loyal, aggressive, territorial, playful or cooped up, it’s a matter of personality and not gender,” she says.

Cat expert Ingrid King agrees. “I personally believe that gender, other than as a personal preference of the guardian, is the least important consideration when it comes to choosing a good match for your resident cat,” she says.6

Early socialization probably plays a greater role than gender does. So does the fact that more and more people are keeping their cats indoors and interacting with them more.

By the way, if you’re wondering how to tell if a kitten is male or female, this video from the Kitten Lady explains exactly how to check — and the kittens in this video are so cute:

This article on the personality differences between male cats vs. female cats was originally published in 2016 and is regularly updated. It was last reviewed for accuracy and May 1, 2020.