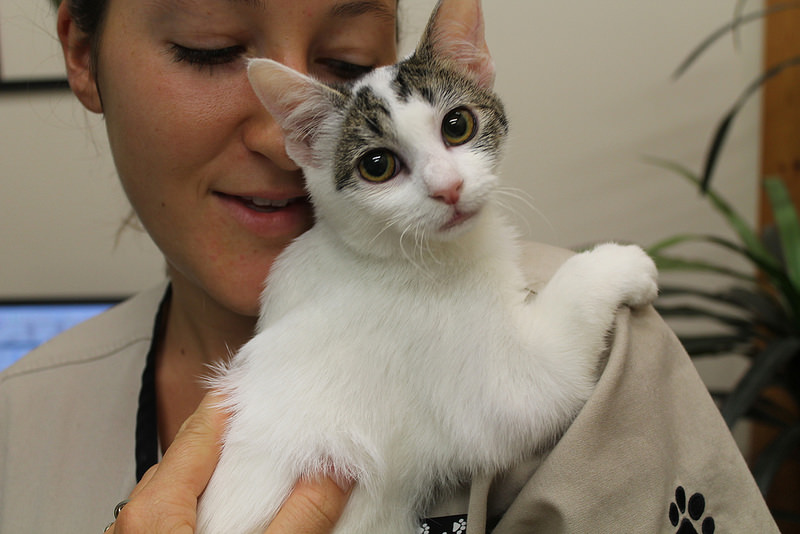 
My friend Barbara brings her kit-and-caboodle to Connecticut Feline Medicine and Surgery. The way she tells it, there are a lot of pluses to going to a feline-only veterinary clinic.

First, her cats don’t suddenly find themselves in a place full of barking and dog smells. As a result, their stress is lowered, and those of us who have dragged countless shrieking, hissing carriers into the vets’ offices know what a blessing that is.

The biggest perk is that Barbara has a veterinarian who speaks cat fluently.

“Dr. [Letrisa] Miller clearly takes communication with her feline patients seriously,” Barbara says. “She has learned to move in a cat-like manner, schools her eyes and facial expressions, and never raises her voice until she’s the ‘doctor’ speaking to the human. Then her demeanor changes to the quintessential scientist and veterinarian she is.”

According to the book The Feline Patient, the first cat-only vet clinic in the United States was The Cat Clinic, of Pasadena, California, founded in 1955 by Dr. Robert L. Stansbury, DVM.

A few other cat-only practices opened in the 1950s and ’60s. Then, starting in the early ’70s their numbers started climbing.

For example, 1972 saw the opening of Veterinary Practice Limited to Cats in Sacramento, California. Now known as River City Cat Clinic, it was founded by Dr. Robert Powell, DVM. His daughter, Terri, tells us he was a lifelong member of the American Veterinary Medical Association. “He was a member for 57 years and had their card in his wallet when he died,” she says.

In 1973, New York City got its first brick-and-mortar, feline-only clinic: The Cat Practice, founded by cat therapist Carole Wilbourn and her then-husband in 1973.

Others to follow in the years ahead included the Chicago Cat Clinic, the Boston Cat Hospital, Manhattan Cat Specialists and the Cat Clinic of Orange County.

Arielle Bennett, who now runs The Cat Practice with her husband, Dr. Eric Dougherty, DVM, says she believes cat-only hospitals are more popular in areas “where there’s a higher cat population. In the big city, you have a higher percentage of apartment-dwellers, and that usually means a lot more cat people.”

According to the American Association of Feline Practitioners (AAFP), there are “millions more owned cats than owned dogs in this country,” but cats log in a whole lot less veterinary time than dogs do. “A major reason is that it is very stressful to take cats to the veterinary practice and often owners believe their cat doesn’t need routine checkups and veterinary care.”

So, in 2012, the AAFP began the Cat Friendly Practice (CFP) Program.

Note: A CFP is not the same as a feline-only clinic or hospital. It simply means a vet on staff happens to be an AAFP member and that the practice itself has shown a “dedication to increase the quality of care that felines receive.”

Why a Feline-Only Practice?

“If you’re a cat-only person, you often take your cat just as seriously as you would a child,” Bennett says.

At a feline-only clinic or hospital, you’re getting a vet who’s a specialist when it comes to cats “because that’s all he sees, and the knowledge becomes like the back of his hand.”

Plus, the facilities themselves are generally designed with cats in mind. The vets are “better able to invest in more equipment and medical supplies specific to the illnesses cats get,” says Dr. Trisha Joyce, DVM, of New York City Veterinary Specialists.

Most feline-only clinics and hospitals offer boarding as well.

Boarding requires that cats be up-to-date on their vaccinations. Many of the cats who are boarded at The Cat Practice wouldn’t see a vet otherwise, says Bennett.

Check out what the Country Cat, a cat-only veterinary practice in Michigan, has to offer:

“I think cats are so under the [radar],” Bennett says.

“They’re the decorative animal. The biggest thing with cats is people don’t realize they’re sick because Behaviors and Training,cats don’t show symptoms as quickly as dogs or people do. Because they’re predators, cats hide their illnesses very well.”

Cats, as the Oxford Cat Clinic in the UK notes, sense “when they are with ‘cat people,’ and our sympathetic handling encourages patients to become much less apprehensive while being examined.”

The Guelph Cat Clinic in Ontario actually has birds in the examination rooms to distract the cats.

Staff members there also make use of Feliway when necessary, though I suspect that “slow, gentle handling” does more good than anything. Cats, like horses, quickly pick up on what kind of person is handling them and respond accordingly.

My own vet? His general practice sees all sorts of pets. I trust him with my cats, though, and I don’t feel the need to switch to a cat-specific practice — but I sure do get the appeal.