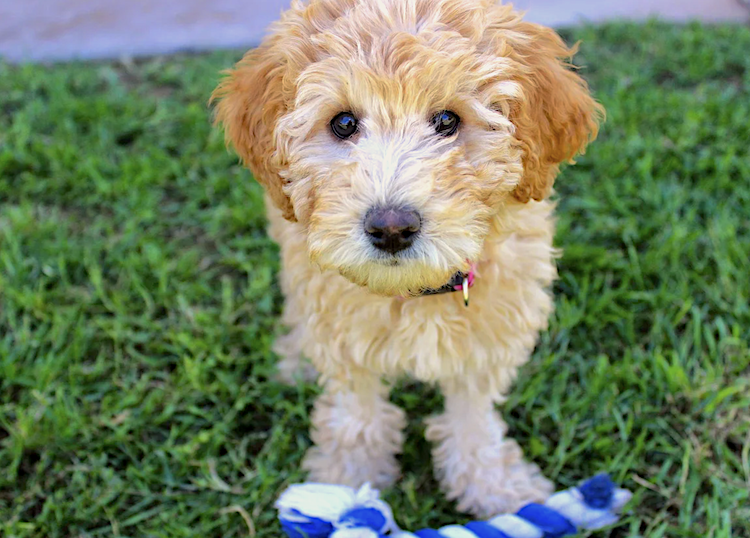 Labradoodles described as monsters? Those adorable fluff balls loved by all?

Wally Conron, “inventor” of the Labradoodle, wasn’t disparaging the dog itself when he said he wished he had never bred a Standard Poodle and a Labrador Retriever back in 1989. Not at all.

He was bemoaning the fact that he had ignited the Labradoodle and “designer breed” craze in general. The snowball effect of people falling over themselves to have a doodle — and unethical “breeders” who got on board to fill this breeding demand — is what Wally Conron is sad about 30 years later.

As the breeding manager for the Royal Guide Dog Association of Australia, Conron had been asked to create a hypoallergenic guide dog for a blind woman in Hawaii.

Ultimately, Labradoodles are neither completely hypoallergenic nor very good guide dogs. But they have become extremely popular pets.

Why Are Labradoodles and All Doodles So Popular?

What has happened since Wally Conron’s first litter of Australian Labradoodles emerged? Here’s how Nancy Tanner, CPDT-KSA, a certified dog trainer, explains it:

And why are doodles amazingly popular right now?

The Labradoodle craze is just like every other breed craze where popularity leads to problematic breeding.

But because there is no American Kennel Club breed standard (the Labradoodle is not an AKC-registered breed), a lack of care about breeding for health and temperament, never mind looks, is even more of a problem than with typical bad breeding of purebreds.

Caveat: There are ethical, reputable breeders of Labradoodles and designer breeds. You just need to find them.

Many people think that because Labradoodles are a crossbreed, they are generally healthier than a purebred. This is not true.

Unfortunately, the health and genetic problems of both Labs and poodles have shown up in the Labradoodle.

Crossbreeds have been thought to benefit from something called “hybrid vigor,” or outbreeding. This would be the opposite of inbreeding. In dogs, crossbreeding theoretically lessens the chance of genetically inherited diseases.

Is this true of the Labradoodle? Probably not. Many Labradoodles in the United States seem to be prone to diseases that plague both the poodle and the Labrador since these breeds already suffer from inbreeding.

Now inbreeding of doodles to doodles has added more insults to injury. For example, many vets describe their doodle patients as “off-the-wall crazy.”

What Are the Major Health Problems in Labradoodles?

From the Poodle, Lab and Golden Retriever side:

Other health problems in Labradoodles:

If you’re thinking about getting a Labradoodle, read between the lines in many of the breed descriptions.

When they say, “Doesn’t like to be left alone,” this can translate into “Cannot be left alone!” They can be attention hounds, destructive or downright irritating if not given enough exercise and lots of face time.

Many Mini Labradoodles (cross between a Miniature or Toy Poodle and a Labrador Retriever) are an exception, in my opinion. Not generally hyper, they can even seem aloof and standoffish.

The answer is no, or not entirely.

Although a doodle has less dander than a Labrador Retriever or a Golden Retriever does, even some of the original Australian Labradoodles back in 1989 were not hypoallergenic. Out of 10 puppies in the second litter of Labradoodles ever born, only 3 had nonallergenic coats.

Because there is such variation in the coats, all doodles need grooming — but some more than others.

Look for a Healthy Dog, Not a Designer Label

The poster child for the “designer breed,” the Labradoodle has been blamed for sparking the crossbreeding craze producing Puggles, Shih-Poos, Cavachons and millions of doodles.

And people don’t seem to mind the price tags that match their designer handbag dogs. About 6 months ago, I complimented a woman on the street on her shaggy dog. She stared at me with contempt and answered with an air that called me stupid 100 times over and said, “This is a Bernedoodle.”

My bad. It was as if I didn’t know the difference between a Louis Vuitton handbag and a knockoff, I guess.

Already familiar with the Goldendoodle, Cockapoo and Schnoodle, I suddenly brushed up on Caboodles and Jackpoos. If something is curly and walks, I just say, “What a cute doodle.”

If you’re shopping for a doodle, please put in the extra leg work to avoid health problems as well as behavioral problems. It is more likely that you will have bad actors trying to sell you a designer breed than is the case with other purebreds.

Personally, I love most doodles. I do find, however, that they are often a family’s “first” dog. For first-time pet parents, doodles can be a large bundle of energy with a lot of grooming needs.

Whenever you are getting a pet, do your research, be prepared and enjoy your new family member.

In this video, Brian Ricks from Easy Retriever Training explains “everything a Labradoodle breeder might not tell you”:

This pet health content was written by a veterinarian, Dr. Debora Lichtenberg, VMD. It was last reviewed June 29, 2020.
If you have questions or concerns, call your vet, who is best equipped to ensure the health and well-being of your pet. This article is for informational purposes only and is not a substitute for professional medical advice, diagnosis or treatment. See additional information.

LAUGH & FORGET YOUR STRESS! – Best ANIMAL VIDEOS 2020
FUNNIEST CATS will cause you LAUGH ATTACK – STAY HOME and HAVE FUN!
Nothing BETTER than starting your day with a GOOD LAUGH! – Best of KIDS and BABIES :)
Funniest CHIUAUAS in the WORLD – Must WATCH!
You'll LAUGH FOR SURE! – Best FUNNY ANIMALS